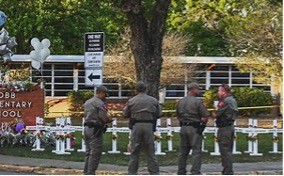 The painful headlines of mass shootings are appearing more frequently.  In 2022, there have already been 27 mass shootings. The most recent attack in Buffalo, NY, and in Uvalde, Texas have left the country once again in mourning asking when and how will this stop.

The issue of gun control is as divisive as any other in this country.  According to a Pew Research Center study, only 48% of Americans see gun violence as a big problem.  The attitudes about gun violence also vary widely by race, ethnicity, party, and community type.  In February 2020, the Jewish Council on Public Policy (JCPA) Delegates Assembly adopted a resolution on Gun Violence Prevention.

Rooted in the belief in the sanctity of life, the Jewish community relations field has fought for decades to prevent gun violence, which has become heart-breaking and unacceptably common. Gun violence, including mass shootings, have reached epidemic levels, impacting people from every walk of life in almost every community in our nation. The Jewish community has itself experienced the deadly effects of gun violence. Americans are now 25 times more likely to be killed by guns and eight times more likely to kill themselves with a gun than people in other developed countries. Each year, over 36,000 people are killed by guns, and gun-related homicide remains the leading cause of death among Black teens and adults ages 15-34.

JCPA’s work on gun violence prevention began in 1968. Over the next four decades, JCPA repeatedly returned to gun violence prevention, building a consensus within the Jewish community to support commonsense regulations while opposing repressive crime control measures. Based on the 2013 Resolution on Mass Violence, JCPA penned an open letter to Congress in 2018, signed by 22 national Jewish agencies, including the four main denominations of Judaism, calling for stronger measures to end gun violence.

The Jewish community has a deep and abiding concern for public safety. Driven by our belief in the overriding sanctity of life and the commandment against murder, the Jewish community relations field is committed to a comprehensive approach to reducing gun violence, and to condemning mass shootings as domestic terrorism.

The Jewish Council for Public Affairs advocates for several reforms on a national level but involvement in the Jewish community differs across the country.  Many communities have chosen to focus on more pressing matters for the Jewish community but perhaps it is time for our local and national agencies to revisit the issue as gun violence continues to grow and will inevitably end up at our doorsteps again.

As Rabbi Abraham Joshua Heschel phrased it, Judaism calls upon us to take “a leap of action”.  Many people feel at a loss for what actions to take next and what can they personally do to make a difference.

A few recommendations made include:

New Jersey has some of the most far-reaching gun safety laws on the books. The Governor and the Legislature have already taken significant steps to combat the growing gun violence epidemic. Among other measures taken, New Jersey has established a “red flag” law for gun violence protective orders, criminalized firearms trafficking, strengthened background checks, reduced the maximum capacity of ammunition magazines, banned “ghost guns,” established the Gun Violence Research Center to identify evidenced-based solutions to the gun violence crisis, and established a partnership with a coalition of states (Connecticut, New York, and Pennsylvania) to share crime gun data within and between law enforcement agencies. The gun safety package of legislation, if passed by the Senate and Assembly and signed into law, would be the third wide-ranging gun safety package signed by the Governor since taking office. Governor Murphy held a press conference calling for the passage of the Comprehensive Gun Safety Legislative Package that he initially proposed in April 2021.

Our advocacy efforts should also include advocating for full funding for the Bureau of Alcohol, Tobacco, Firearms, and Explosives (ATF) as well as an appointed full-time director. To be truly successful, we must also advocate for full and open communication and coordination between federal, state, and local agencies charged with the enforcement of gun laws while working with gun manufacturers, distributors, law enforcement, and other relevant stakeholders to support and adopt evidence-based gun technology to reduce violence.

Individually, it is frustrating that the process takes so long but by reaching out to elected officials as an eventual collective voice with your concerns, signing petitions, voting, and educating ourselves on the factors leading to gun violence, we will eventually be heard. Public outcry and involvement are what encourage change and we continue to strive for a caring and peaceful existence among all people in all our communities!